Maybe because I had just finished the marvellous What was Lost by Catherine O’Flynn (my first ever five stars on Library Thing) I had trouble choosing a book to take away on our Gower trip.  I ended up rushing into the library and choosing a handful almost at random hoping at least one would appeal.

In the event, the novels remained unread or unopened, but Silver River by TV producer Daisy Goodwin   is still going strong. Daisy is the daughter of sixteis wild child Jocasta Innes and the opening chapters are dominated by her mother’s terrifying lover, an aging hippie called Joe whose idea of fun was to  dangled Daisy over a cliff edge in Dorset and later incite her to extort free chocolate from the Mars company. Joe is one of those characters who could stand up in any novel. Now that he has left the scene I hope there are others coming along to take his place.

Meanwhile a thank you to the golf pro at Pennard who directed us across the course (sans clubs) to these fantastic views of Three Cliffs Bay and thence to the local  coffee shop whose cakes were equally memorable. 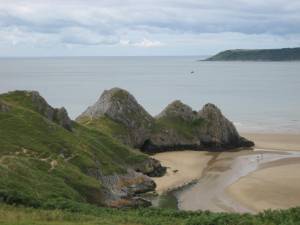 One thought on “Away from it all”