I didn’t hold much truck with the recent  BBC  Robin Hood, probably because my heart is indelibly wed to the ITV 1950s version. Catching the latest BBC series, however, I think things might be looking up.

Men still look like overgrown hobbits, but callow youth Robin (Jason Armstrong) has acquired a few extra pounds and an interestingly surly air while  dispensing with the irritatingly modern Maid Marian means we can have more varied female interest.  Better still, the luscious Richard Armitage as local baddie Guy of Gisborne  now teeters on the brink of gothic madness, a look that suits him down to the ground.  Sardonic charlatan Keith Allen is left  looking decidedly run of the mill.

Still, all in all, my favourite televised Robin  is probably the hilarious spoof by  Tony Robinson which I watched with my own children and in which Maid Marian most definitely wore the trousers.

These pictures are from the Robin Hood blog

Off for a few days holiday this week. Will no doubt return to my literary high horse before too long. 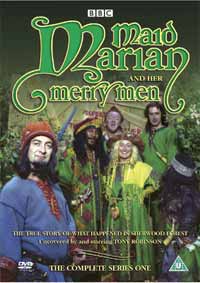 One thought on “Riding through the glen”