Call me cynical, but when a  reviewer says that  main character or even ‘star’ of a novel is a city or a country, I’ve learned to adopt a certain suspicion. Yes, I can think of dozens of books across both literary and commercial genres  where the setting is a hugely memorable element of the story, but not to the extent that the place either vies with or eclipses the human drama.  Needless to say, a few months after formulating this opinion, I’ve found my first exception to the rule in the shape of Simon Mawer’s The Glass Room.

Of course, spanning as it does the history of  Czechoslovakia from before the rise of Nazism to  the fall of the communists, there are human dramas here of the most intense kind. The architect of the house was a Jew as were the owners, who eventually flee to the west only for the house to be put to chilling use as a Nazi laboratory and after the war as a hospital physiotherapy department. For most of the book the  main characters are the family who had the house built, but what fascinated me from a writer’s point of view was that in the later chapters, when a new cast of characters arrives , the glass room continues to exercise an almost surreal presence so that I never fretted over the jumps in chronology or queried the direction of the plot.

And so yes, I’ll ammend my previous position to allow that a place can be as important as the human players in a drama or novel (though never more than!)

If there was one character I would like to have known more about, it was the fictional architect, a charismatic presence who simply does his work and moves on. But even her I’ve found a consolation prize, since I have since discovered that the house is based on the very real Villa Tugendhat, built by Ludwig Mies van der Rohe, both of which I can read about here to my heart’s content. 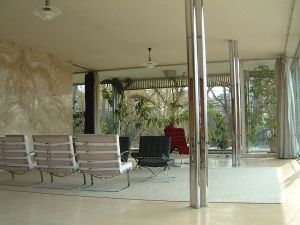