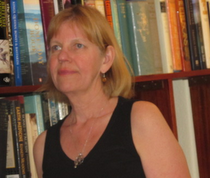 I met Nina a few years ago when I first joined Bristol Women writers and she was already an ‘old hand’. Since then we’ve both been through a few life changes but have continued to meet up every few weeks until this summer when she and husband Jim made the move fromBristoltoWest Wales. I’m delighted she agreed to being interviewed so that I (and you) could fill in a few blanks.

I’m hoping Nina will be around to take comments when this is posted, but if not, do look her up  at her Kitchen Table Writers blog.

Here’s what she had to say when we spoke last week.

Hi Nina
I know all about your current projects, but when did you actually first think of being a writer?

I can always remember the moment in reception class when we were first asked to ‘write a story’. Mrs Marsden had read us the fable about the mouse and the lion. She put the book down and said, ‘now you can have a go children…’ (or something similar). I can’t recall writing my story, but what I do remember clearly is thinking…people write stories! It was a complete revelation. Previously, I suppose I assumed that stories flowed from a higher place, and just…arrived…like manna. The idea that people wrote their ideas down on paper, and these could end up in a book with a hard, colourful cover overwhelmed me. I think I knew right then I’d like to be one of those people. I certainly didn’t think about payment or reward…which is just as well! Mind you, many writers would say that ideas for writing do flow down from a higher place, and I wouldn’t disagree with that entirely.

Well for me I suppose they sometimes flow and sometimes get stuck  there –  like a cat in a tree!
I know you’ve had a young adult book published some years ago. Can you tell us about that and if you feel you’ve changed direction since then ?

I was delighted when my 9+ novel, Sweet’n’Sour was published by HarperCollins, although it was a bit of a poisoned chalice as they are such big boys that they allow smaller writers to sink or swim. I had a great review from the Sunday Observer on, and a great ‘strapline’ from the reviewer… Embark on Nina Milton…and you won’t stop reading…
Since then, I’ve been writing books for both adults and children. I have now completed a second novel for 9+ children and started a third. The second is with a small Welsh publisher, who are considering it; they like it a lot but they’re trying to persuade me to change the setting to a Welsh landscape,and I’m considering this.
I’ve also completed a contemporary novel, which my agent read and told me she thought she could sell if I changed the protagonist’s gender. I’m always very wary when publishers ask writers to do these sorts of things; they’re a lot of work and they may be for no reward at all, but I trust Lisa, and she does seem to love my work, so I’m in the middle of doing this at the moment (like…I should be getting on with it now!). But I’m also very caught up with the other books I’m writing, too, which is a series about a young shamanic therapist who is trying to live a simple, alternative life but keeps falling into dangerous adventures due to the sort of work she does. People come to shaman with very difficult internal problems and a lot of her work is done entirely on a different plane. I really enjoy writing these parts; to me they’re not fantasy, but descriptions of where shamanic journeys can take you. Sabbie Dare is a bit of a dreamer, a bit of an innocent, and she often gets into dreadful trouble in the real world because of her insatiable curiosity and genuine nature; she really wants to help people…even quite strange and frightening people.

How did the character of Sabbie Dare arrive in your mind? did you know she was going to be a detective?

She did arrive fairly fully-formed along with the basic plot to the first novel. But she’s not a detective. She doesn’t have a police-genome in her body. But she’s got the hots for a detective on the local force, and when they compare their work, they realize they have a lot in common…once they get a puzzle to solve, they worry at it until they know the answer – and they both want to help the people who come to them in trouble.

Oops, maybe I should have said sleuth or investigator rather than detective – which does sound much too official. Any interest in Sabbie from publishers or agents so far?

My agent is positive she can sell the stories, but she’s having trouble convincing publishers that this fusion of genres; crime, thriller, contemporary female literature with a little bit of fantasy, is a strong bet. She determined though, and I feel it will only be a matter of time.

How did you end up working for Open College of the Arts and what has your commitment to it been?

I applied to be a tutor with the OCA after I gained my MA in creative writing from Bath SpaUniversity. I’d always enjoyed giving constructive advice, and the OCA are the leaders in the field of offering real, practical advice to all kinds of artistic endeavour, while also offering good degrees. Since joining them, I’ve had hundreds of students, some of whom have gone on to complete their books and some have become personal clients of Kitchen Table Writers.
I’ve also written two sets of course materials for the OCA; Writing Skills, which is the initial level one course, and Life Writing at level two. (In Higher Ed, that’s levels 4&5.) I also assess course work for degree credits three times a year at their headquarters inBarnsley, and recently I ran a workshop for the OCA at the Ilkley Literature Festival, which I really enjoyed.

Has the move to Wales messed with your writing head or provided new inspiration?

Good question! It doesn’t seem to messed with my head, and the landscape is feeding me with loads of ideas; it is just so ancient and breathtaking. I’ve recently composed a series of poems on the Mabinogion (the book of Welsh legends), and joined a storytelling class here. But the main difficulty is not that I can’t write, it’s finding the time while we create our house and garden. I try to split my time fairly between the computer and the spade, but when it’s nice out, the garden really beckons, and there’s so much to do. I imagined that, as winter came on, I’d be writing most of each day – I’ve got a lot of projects I want to have a go at – I haven’t written a short story since I arrived here – but that hasn’t happened yet because we’ve had such marvellous weather for November. And long may it last! 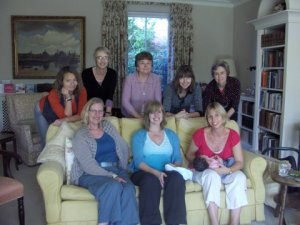 We miss you in BWW but it sounds like you made the right move. Thanks for coming along and best of luck – with the computer and spade!