Here are two books about travelling in  Britain that couldn’t be more different, since one is a real life contemporary travelogue and the other is fiction set in the Plague Year of 1348. But I liked both of them a great deal and so I’m taking the opportunity to pair them up (so there!) 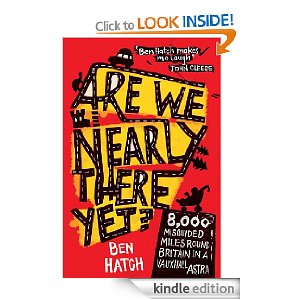 I admit I was a tiny bit sceptical when approaching Ben Hatch’s comical account of taking two young children (both under 5) on a round-Britain trip. Since the days of packing our own car to the gunnels and setting off with two youngsters are long gone,  I thought the sense of humour might be too laddish, or that I might simply not want to go there again. For the first few pages I remained suspicious, waiting for the chirpy  humour to pall, as I think it might have done if the tale hadn’t taken a serious turn when Ben’s Dad is diagnosed, (out of the blue, as these things often happen) with cancer. From this point on the journey becomes more reflective and personal, with passages of reminiscence interspersed among the hilarious ups and downs of the car trip itself which also becomes a chance for Ben and his wife to look at their own relationship.

Don’t get me wrong, this is still a very funny book as well as a tear-jerker but what made it work for me is the courage with which Ben Hatch reveals his own weaknesses and his attempts to overcome them. Since I read it, it has had honourable mentions all over the place, and rightly so. 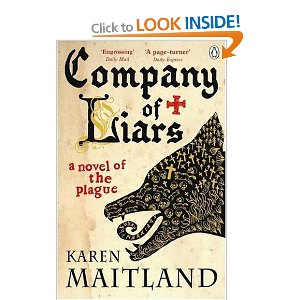 So what of Karen Maitland’s Company of Liars? I read this between a damp Christmas and New Year, and although the book begins in midsummer it fitted the season very well, evoking the rain-sodden landscape in a year when apparently it did rain every day from mid-summer to Christmas. The narrator is a camelot,  a seller of holy relics, or as he sees it, hope, who prefers to travel alone rather than give up the untold secrets of his past. With the ‘the sickness’ arriving in the south of England he gathers around him a band of loners, all beset by secrets and all hoping to outrun their past lives as well as the fast-moving plague.

The novel is totally convincing (even without the historical notes I believed every word ) in the detail of life in towns villages and countryside, but what I found most intriguing was the blend of myth, faith and superstition which sustains the travellers, and the populace as a whole. As the journey progresses, each tells a tale of his own past which involves magic, miracles or sheer fantasy. Changeling children, a man who is half swan and a young wife cursed by a witch are all readily accepted if not as truth then at least as a legitimate narrative. With ‘official’ belief system under threat ( a priest is no longer necessary for burial if  none can be found) the reader steps into this landscape of the mind and understands how it might sustain people in the harshest of existences as those around them fall prey to death or loneliness.

But this isn’t just about atmosphere. The plot is excellent (with a prologue that really works) and the ending totally in keeping with the rest of the book.

This is a great read, and if Are We Nearly There Yet? asks some questions about modern-day life, this one will make you grateful for the comforts that come with it.

One thought on “Company of Liars and Are We Nearly there Yet?”