Well before the tennis action got under way last Sunday, I was over in Clifton learning about Bristol Suffragettes from local author Lucienne Boyce  whose book from local publishers Silverwood has just come out.

Assuming like many people that the suffragette movement was London-based,  I was fascinated to learn on our walk around leafy Clifton how the movement was organised across the country and how big a part Bristol played in the action, from the appointment of local organiser Annie Kenny to an attack on Winston Churchill at Temple Meads station.  I was amazed too at the ladies’ grasp of marketing. Way before twentieth century gurus pronounced on medium and message, the WSPU had newspaper owners onside and sold suffragette merchandise from shops throughout the land. Plus ca change…?By the end of the walk I had learned a huge amount about the suffrage movement as a whole as well as the Bristol Suffragettes. 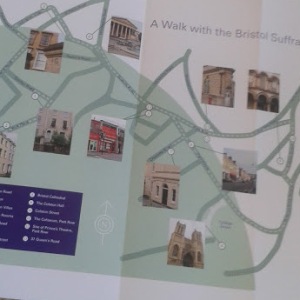 And as a reminder of the day, the book arrived yesterday in the post. Packed with detail, photos and research,  I think this is also an outstanding example of book production with a generous use of white space, pleasing layout, good quality paper (so that even old photos look crisp) and a fold-out map of the walk we did last week.  When the average paperback retails at £8 I think this is exceptionally good value at £11.99.

And the historic bit? Well I’m still basking in the glow of the Wimbledon final. What a day, what a win, what a man!

As for me, it turns out to be six years ago to the day that I first registered for WordPress. Should be up for a long service award if nothing else 😉