Stroud Short Stories was a great evening for  readers and listeners – and I was lucky enough to be both. It’s a lovely venue with a fantastic atmosphere and I   can recommend the next event (April 2015) to anyone in striking distance of Stroud with an interest in short stories as a writer or a reader.But for me it represented something more. Okay, the audience was big (a sell-out!) and none of them had had an arm twisted by me – or as far as I know anyone else – to turn out on a winter’s evening. In fact they had paid a modest sum to be there. But something else changed too.

It has taken me a while to get used to being in front of an audience as a writer.  Despite having a stories and a novel published,  I wasn’t quite ready to inhabit my status in public.  Was I worth  listening to, was my work really worth coming out for? I suspect on some of my early outings my discomfort was clear. I read too quickly or too quietly and often edited bits out as I went along in my eagerness to get to the end! At Stroud I had worried my story would be dull compared to the others but as I got going I realised it wasn’t dull, it was just different. I also remenbered it actually sounded goodand out here in front of a microphone it did sound good or – at least better than in front of the bathroom mirror! It was time to enjoy the moment.

A final confession. Years and years ago, when I first started writing,  one daydream I allowed myself was to be standing in front of an audience (not the Albert Hall, just some cosy pub or arty cafe) who would listen with rapt attention to the outpouring of my genius. Since my genius at the time was more in my head than on any piece of paper, it didn’t happen, and it got crowded out by other dreams and ambitions ( some more realistic than others). But during my rendition of Preparing for Winter, it tapped on my shoulder and reminded me that this dream, however small on the cosmic literary scale, actually had come true. So a final thanks to all those who indulged me and gave a good imitation of being totally rapt while I was up there living my little dream.

Well that’s enough self-indulgence or one day. The powers that be have decreed that those who read in October will not be considered for the next Stroud Short Stories event. A very wise decision. If I could rustle up something else worthy of a spot, the fame would most certainly go to my head. But if you get picked I could well be there to watch.

This is me reading on the night and also Alice Jolly, a writer I’d already been in youch with on  Authors Electric. I’m looking forward to being in touch with her and more of the Stroud crowd. 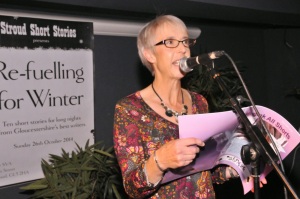 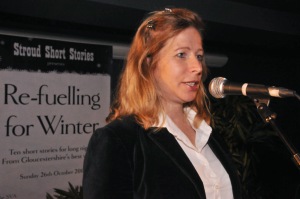 2 thoughts on “Enjoying the moment in Stroud”