Every now and then we go back to St Andrews and always find things have changed. I already knew  my old hall of residence had become luxury apartments (!) but it was somehow even more of a culture shock to find Fatface , Costa  and Waterstones rubbing shoulders with more – um, traditional establishments. But  each time we go we have a new purpose and see the place in a new light. This time I was on a bit of a research mission.

Right from the start, my interest in Hill and Adamson was piqued by knowing the places where they lived and worked, especially St Andrews where many early calotypes were made, some of them without the help of D. O. Hill.

Because if Robert Adamson was the unsung hero of their partnership, his brother John was also a strong influence. It was John who took on the development of the calotype process from Sir David Brewster, and roped in his brother who was unsuited to outdoor work. Together they perfected the technique and set up the business in Edinburgh where Robert was to fall in with Hill. Although John remained in St Andrews and never worked as a professional photographer, he continued to make calotypes and other forms of early photographs long after his brother’s death and had a longer association with the medium than either his brother or D. O. Hill.

I also had a desire to see Robert Adamson’s grave, which I knew to be in the cathedral churchyard but had never been able to find a picture of. And so last week, as part of a holiday in Scotland, I decided to see if I could find anything relating to John or Robert in the town. I haven’t been actively researching this for quite a while and stupidly didn’t think to bring any of my old notes along with me (doh!) but I’d recently turned up a description of the family grave  in Robert Crawford’s fascinating The Beginning and End of the World . So all I had to do was find it!

Arriving in the early evening the omens were not good. The cathedral grounds were closing for the night, so no chance to go searching,  and a close examination of a good stretch of South Street gave me no clue as to where John might have lived. In the morning we’d already had a fruitless visit to Perth Art Gallery where none (none, what’s that about!) of Hill’s work is on public display and I was suddenly less than optimistic about finding the grave or anything else.

But back in our B&B  I did some Googling and discovered John’s house had been pretty well staring me in the face, in the shape of The Adamson – Scottish restaurant of the year, no less! –  occupying 127 South Street, just past where I’d given up looking earlier on! So no problems of knowing where to look next day.

Returning to the cathedral was equally problem free, as after a five minute wander I stumbled on just what I’d been looking for. 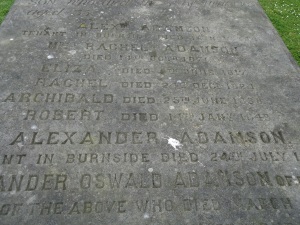 So, mission accomplished in more ways than one.

Along the way I also noticed these houses at the east end of North Street which bear a resemblance to Hill and Adamson’s Fishergate pictures and answered a question in my mind as to why fishermen and women would have lived and worked in North Street which to me was closer to the golf courses and rugged cliffs than the harbour.

But of course this far end of the street  is much closer to where boats would have put out, so suddenly these pictures make more sense.

I’ve always had a soft spot for John Adamson, of whom D. O. Hill wrote,

‘his brother the doctor … has watched him as a child during his long illness. I have seldom seen such a true and manly sorrow’

and so I’m glad he’s been acknowledged by his home town – not to mention the fine dining community! But it does seem odd that Robert, in many ways the more famous brother, isn’t recognised here at all, unless of course there’s something else I missed …

This is John’s later picture of the house.  And as I write this blog I discover her’s going to be a St Andrews photography festival later this year. Fantastic!

2 thoughts on “St Andrews in a New Light: the Adamson family”