So here we go on the blog journey that’s going to retrace some of the steps I took in St. Andrews way back in the 1970s (there, that’s out of the way) and maybe adding a couple of more recent finds.

A could be for so many things, Academic Dress, Academic families, or Aien (the student newspaper as it was back in the day) but after a bit of mulling over, I’ve decided to put the obvious to one side just for a moment and choose Albany Park.

So there’s a surprise. Not the most august of landmarks, in fact not a landmark at all, AlbanyPark is a cluster of modern houses in the new wave of student accommodation that catered for those who well, wanted to cater.

And so after three years of a cosseted existence where breakfast, lunch, afternoon tea and dinner were all provided this is where four of us  chose to take on the challenge of living and cooking together. Albany Park was brand new at the time and an immediate hit. Instead of a warden there was a friendly caretaker on site, and we no longer had to endure the predictability of hall menus where Chick Frick, Hawaian Bacon and Chicken Maryland came up with appalling regularity. As the houses were for six, two newcomers were thrown into the mix, although I seem to recall they quickly withdrew from our attempts at menu planning and money management and ‘did for themselves’.

So what did we eat? The only things I can recall were mince and potatoes (not much adventure there)  and ‘stuffed vine leaves’ where cabbage stood in for the vine, not exactly a native species in these parts. We quickly found that a varied menu was a bigger challenge than we had realised. Then the friendly caretaker turned traitor and made a spot check, and our kitchen was declared unhygienic. We were black affronted. Let’s face it, did he really have to look behind the fridge? 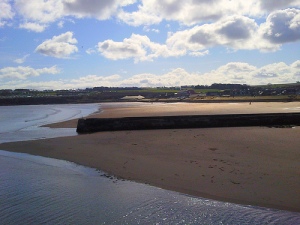 In its favour Albany Park was just a bit out of a town that by Finals year was beginning to feel a bit claustrophobic, and a stone’s throw from the East Sands, excellent for a bit of personal space when things got tough. For me this had a less fortunate legacy. Having bought two rather nice pairs of Ravel platform shoes in a sale, these were my chosen footwear for the twice daily stomp into town. I’m not saying they hurt, not all the time, but I don’t think my feet have ever been quite the same.