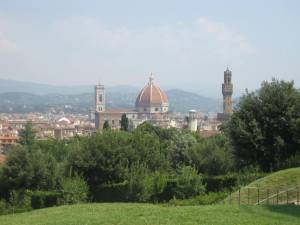 It’s not that I don’t like museums, in fact I like them a lot, and in some ways the bigger the better. Those gorgeous marble floors and plaster ceilings do it for me regardless of what’s on the walls or in the glass cases. But  a couple of hours in any museum is always enough, which, if you add queuing time, makes the bigger places self-defeating. That’s why in Florence last week we shunned both the Academy and the Uffizzi and opted instead for the  Bargello, the National Scupture Museum, which on the morning in question was almost deserted  except for ourselves and a group of art students looking suitable serious as they took notes behind their leader.

As we entered the Michelangelo Room they moved off, except for one, still sitting on the bench in front of the Bacchus when I decided to take the weight off my own feet. ‘Would you like to hear a story about this statue?’ enquired the young man beside me. I was happy to sit still for a bit longer and I felt he was keen to show off his knowledge, and so I said yes. What he told me was a complex but entertaining tale of how Lorenzo di Medici used the statue to play a trick on the Pope,  the eventual outcome adding greatly to Michelangelo’s reputation. Later I recounted it to my companions who had missed the story- telling session.The episode made me think about the importance of story-telling in bringing art to life and reminded me of the Van Gogh and Gaugin exhibition we saw some years ago in Amsterdam where the audio commentary (compulsory because of the crowds) made the most compelling story imaginable of the paintings on show.As to the story I heard in Florence, I can find no other version of it on the web and plenty to contradict it. Was it  the subject of someone’s thesis in the making, or did my student or his teacher make it up to test the gullibility of  tourists? I can’t say I mind too much either way. It was a pleasant five minutes in the company of an artist and one of his modern-day acolytes.  If there was an  official audio guide, I doubt it would have been any better.At the time it seemed appropriate to give the  student something in return for his trouble, and so I recommended he read The Agony and the Ecstasy,  as it happens a work of fiction. I hope a fair exchange.

One thought on “Storytime in the Bargello”