Finishing a novel – or any novel-shaped book – is a funny thing. Most books of course are finished more than once.  So finishing a first draft brings a huge sigh of relief, maybe a few happy tears for getting the characters out of the muddle I put them in, followed by some mulling time which can be anything from a week to a year.  Then it’s back to the drawing board for Drafts 2, 3, 4… because in my experience it’s only at the end of a first draft I know what I was trying to do. (And if I don’t know then I possibly never will!)

Finishing a final draft is a more ambivalent experience. I race (or stagger) towards the finishing line with every last breath in my body, then a momentary celebration is followed by a terrific  let-down. The first time this happened it took me completely by surprise. I so wanted to finish my first ever novel and did so just before a celebratory holiday in Paris. My principal memory of that trip is trying to pretend I wasn’t suffering from the most awful sense of loss! It was the same with Kettle of Fish. Once Ailsa’s story was complete, I could no longer  have her walking in and out of my conscious (and subconscious) mind.  They were no longer real people, and although they might drop in on me from time to time, they have reverted to being just fictional characters.  For me it’s  somewhere between – ‘so is that it?’ and having actually killed my darlings.

However, it turns out this time is different!  Having rushed to finish (I hope!) the edits for Blink of an Eye this week, I did feel the same let-down and woke up today feeling distinctly bereft, but after a while it wore off. First of all, although the book is fiction, nearly every character is a historical figure  who has been studied, written about and discussed by people other than me.  They existed before I came along and although I like to think Blink will bring them to a new audience and maybe increase understanding of them,  whatever happens their memory will persist. These people don’t just belong to me. That’s a comforting thought on the day when in my own mind I’ve just laid them to rest!

Of course, once a book is published it’s out there and its characters belong to whoever reads it. Writing is the beginning,  the book will have a journey of its own. And that’s where Linen Press have made this a very different experience. Normally there would be a hiatus with a finished book where I package up a pitch a synopsis and a (begging) letter. By the time that’s done the book is no longer  part of my soul so much as a commodity.  Although I still have something to sell with Blink,  it’s really heartening to think that journey  is actually (cover, blurb, publication date!) already under way. Nor did I envisage this whole operation as as being just about the book and I already have a couple of events in the pipeline where I will talk about ‘my people’ and what they got up to with their cameras.

So writing THE END is not such a big thing when I already know it’s just  the beginning.

If I don’t turn up here again before the year, this seems like a good place to say have a Merry Christmas

and a very Happy New Year. 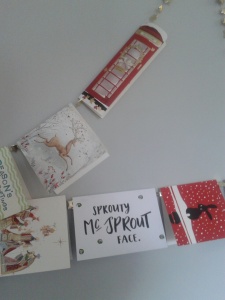