Last year  when I noticed a new competition from Bath Flash Fiction called Novella in Flash (2019 entry here), I thought straight away of my St Andrews 2016 collection ‘In Sunshine and in Shadow’ which with some stringent editing could  have qualified.  But in the end I was too busy expanding this into the novel which became In the Blink of an Eye  to think about condensing it into something smaller – and so the moment passed.

When the winners were announced early this year I did wonder what they had made of this new form of writing but didn’t get round to satisfying my curiosity until  I found myself with a day ticket to the Flash Fiction Festival, held in Bristol in July which featured a number of NiF writers and their work.

Sadly I had only a one day ticket and although I squeezed into the Friday night open mic I missed the ‘official’ workshop on Novella in Flash, but I did run into Bath poet and flash-er Micheal Loveday whose novella  Three Men on the Edge had already caught my eye and I signed up to his ‘late stayers’ workshop on writing a sequence of flash fictions – yes, that would be a novella in a flash, then?

Considering this was the very last event of the (very hot!) weekend Michael did a fantastic job in getting us to produce some original flash from scratch and to think about the forms of story a sequence might contain, hinting that variety of style and content was required alongside some kind of continuing narrative thread. But I did still feel I had only scraped the surface of something and I wanted to know more. The best way of following up was to read the man’s own work.

Luckily a book-swap had already been arranged and I had dipped into Three Men on the lawn of Trinity  College Bristol and was already intrigued, 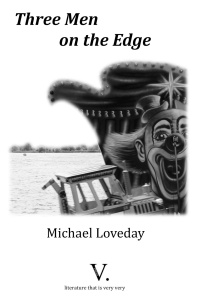 The three men of Three Men on the Edge are Denholm, Gus and Martyn, connected, not by the narrative (maybe one tiny glimpse of an overlap) as far as I could see but by geography. Yes, I could have said landscape  which plays a big part but it’s more of a conjunction of place (Rickmansworth, West Herts) and time – I imagine these stories running alongside each other – which defines them. Denholm is the one I enjoyed the most. Here is a man, rather like George in Mark Haddon’s A Spot of Bother, who suddenly finds himself unhooked from his own life, looking at things from a different perspective,  questioning the way his life has gone. Pieces range from subtle glimpses of character (a list of side-effects of a pharmaceutical product made me imagine how intently he was studying the packet) to more active narrative where he takes walks with a fiend or escapes to his shed to make models while his wife tends her pet bird (also called Denholm – what are we – and Denhom  – to take from that!) The tone ranges from playful to contemplative, all with an underlying sadness, as mirrored in the widow next door who makes up reasons to call Denholm out in the night.

Sadness becomes more intense when we meet Gus who has been bereaved and can find solace only in his surroundings, evoked in the most brilliant language and striking imagery. We see him first in the graveyard where ‘a community of stones stands upright, bare as poked tongues’ and although there is progress of sorts it’s hard to imagine Gus ever disentangled from his grief. Finally Martyn lends us the character of a single man who persists in  pursuing to the point of masochism the unattainable woman – his best friend’s girlfriend – until we see him grapple with his own self-delusion – or at least I think we do!

This isn’t a book that gives everything away, even on a second (or third) reading and I’m left with the thought that the fewer words on the page, the more is expected of the reader in seeing the connections  and piecing together the story. Which brings me back I suppose to Blink , which a number of readers have said they wanted to read all over again when they got to the end, because, I assume, they wanted to read it with knowledge of  what was to come, or  to appreciate the entirety of a narrative that isn’t (as others have complained!) immediately obvious. This in turn leads me to thoughts of what we mean by the much derided category of literary fiction.

But I think that’s enough for now, except to say that a small book doesn’t necessarily take a short time to read and might be better value for money than the fattest blockbuster, and that I may be on the edge of  appreciating a distinctive and seductive new genre.

If you would like some useful and interesting definitions and comparisons of flash fiction, prose poetry and poetry, do visit Michael’s website.