The old home town was not looking the same when I arrived at Dunfermline Bus Station (why do they keep moving it?)  last Saturday morning for the second  Outwith Festival. ‘Reminds me of the Gala Day,‘ said my old school friend Marilyn when we eventually caught up with each other, and yes, there was that buzz in the air, not to mention the flags ( or bunting as we call it south of the Tweed).

Compared to a year ago (when I visited for a one day history conference) the place was jumping.  Fire Station Creative cafe – Festival Hub and all-day music venue – was bursting at the seams and way too noisy for a catch-up. The library cafe  (one of my favourite discoveries during Undiscovered Dunfermline) – was  no better, as the library was a hub too and the lady on the door pressed a festival programme into our hands.

‘Yes, look, I’m in it!’ I said, betraying a complete lack of celebrity cool. Must do better on that score!

Come Sunday, I was the one getting jumpy with two events on the cards. Luckily back at the Fire Station I immediately ran into my contact, Caroline Copeland, festival founder and chair of both events who had invited me to bring Amelia Paton out of the shadows of  history  with some readings from In the Blink of an Eye and to be part of an author panel on getting published. Caroline put me at ease straight away and the audience for the readings, though on the small side  (come one, I was competing with the Scottish Symphony Orchestra!) were engaged and attentive. 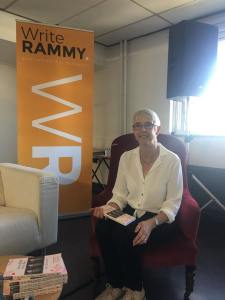 Caroline gamely volunteered to read with me and I suspect the fact that she and I were enjoying ourselves just rubbed off. It really was fun and we didn’t even over-run – professional or what! A bonus came afterwards when the last gentleman in the queue to have a book signed (yes, there was a queue!) announced himself as a direct descendent of the Amelia Paton’s family who play a significant part in Blink. We had a hasty discussion of where exactly under the new Tesco car park (sob) the original family house might have lain and he left with two copies for him and his family. What a thrill to have past and present come together in front of me. I hope I get to hear what the surviving family make of my version of a fragment of their history.

The author panel which followed was very well attended (concert over  I assume!) by an audience of eager writers. I remembered being at events like this myself not so long ago and related to this lively mix of experience and aspiration. My fellow panelists were also great company: Hamish Brown (whose photographic work I had seen two years ago in St Andrews) , YA and vernacular writer  Andrea Hardaker (had we met before? It felt like it!)  and literary consultant Claire Wingfield who is part of Caroline’s new WriteRammy publishing venture (check it out).

Quite a day, but determined to be #outwith as much as I could, I shrugged off tiredness and caught the amazing Emma Pollock in James Yorkston’s Tae Sup wi a Fifer before taking myself off to bed. Outwith was at an end, but I still had  day to go (of which more later).

You might think this could be any local festival and that is possibly true, but considering  this one is in only its second year, the impact it made was fantastic. No one could have been around and not known that something was going on , and if music was at the heart of it, three cheers to Caroline and WriteRammy for making Sunday a day for readers and writers.

For me it was great to reconnect with another facet of the town where I grew up – and bring my book (still in editing on my last visit) to one of its many audiences.

And so to bed – and next day over the original bridge with this view of its new neighbours.